“If everything seems under control, you’re not going fast enough.” Mario Andretti 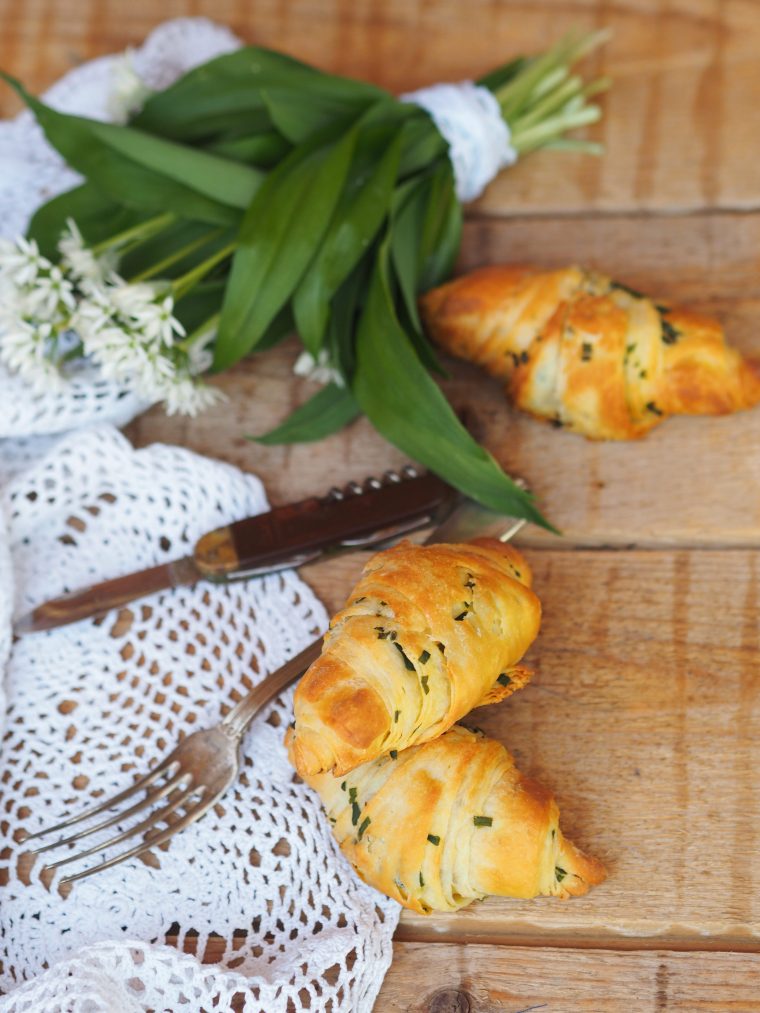 Who in the world doesn’t love croissants? But majority of home-bakers always postpone to make them because of the long process a classic croissant dough requires to make… No doubt that homemade croissants are the best of all – of course when not in Paris… – but is it really possible to make them quick? To make them dairy-free? To fill in between the layers? It is actually quite easy.. it really takes no more than 20 minutes of work… the rest is simply waiting, and the croissants are wonderful. They are probably not nearly as flaky as the classic ones but for all the little work involved they are just perfect. Crispy on the outside, buttery, flaky, a perfect treat for breakfast or brunch. They can be served plain with a bit of jam alongside coffee or tea, or even house a delicious sandwich. 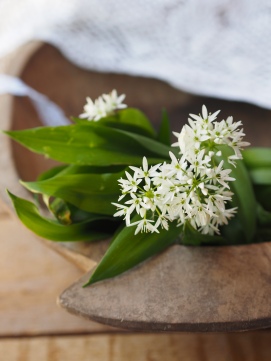 “Every flower blooms at a different pace.” Suzy Kassem

This croissant can be achieved by two speedier methods. One of them is based on freezing the butter and quick turns, the other one’s secret is layering. 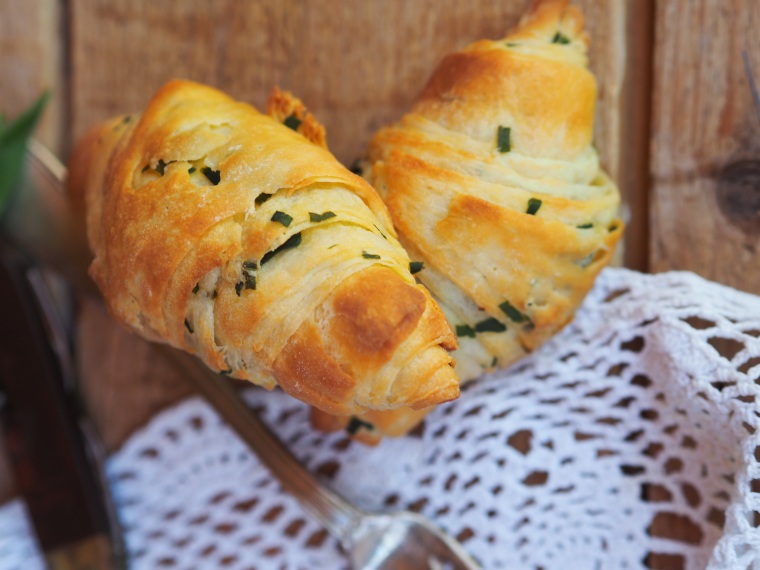 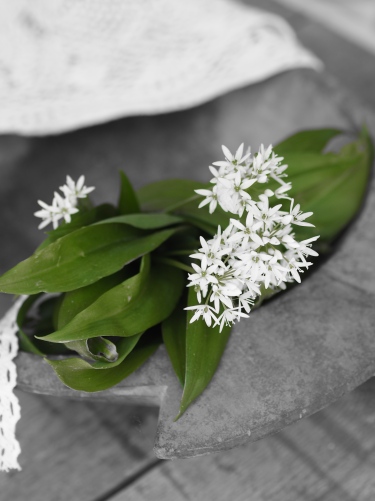 Method
Freeze-turn Method
With the first method freeze half of the margarine, chill the other. Mix the flour and salt together in a bowl. Rub in the chilled butter using fingertips until the mixture resembles breadcrumbs. Gradually add enough of the liquid ingredients mixed together to form a dough. Roll the dough out into a rectangle on a lightly floured work surface. Grate half of the frozen butter over the bottom two thirds of the dough. Fold down the top third and fold up the bottom third as if folding a letter.
Turn the folded dough through 90 degrees and roll it out into a rectangle again. Repeat the process of adding the remaining frozen butter and fold as before. Wrap the dough in cling film and leave to rest in the fridge for 30 minutes before using.
Layering method
In a large bowl combine the lukewarm water with sugar and yeast and set aside until it starts to froth up. Mix in flour, vinegar, salt, oil and mashed banana, and knead into a soft, smooth dough. Cover with clingfilm and rest in the fridge until risen. Mix the margarine with the wild garlic, then chill. Divide the dough into eight equal pieces and roll each out on a floured work surface. Grate the margarine if hard. Spread an equal amount of margarine on seven of the dough pieces and layer them onto each other. If margarine become too soft, rest in the fridge for 10-15 minutes. 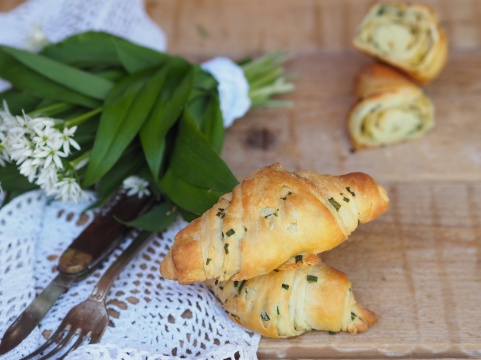 Roll out the chilled dough and cut into eight triangles/wedges. Take each triangle in turn and pull the two corners at the base to stretch and widen it. Starting at the base of each triangle, begin to gently roll into a crescent/croissant, being careful not to crush the dough. Continue rolling, making sure the tip of each triangle ends up tucked under the croissant to hold in place. If adding any fillings, place across the widest part of the triangle before rolling up. If so desired, bend the ends of the croissants inwards, then transfer to baking trays lined with baking parchment, spaced well apart. Cover with lightly oiled cling film and leave to rise for 2 hrs, or until doubled in size. Heat oven to 180-190 degrees C. Generously glaze the croissants with oil. Bake for 25-30 minutes until risen and golden brown, then cool on wire racks. 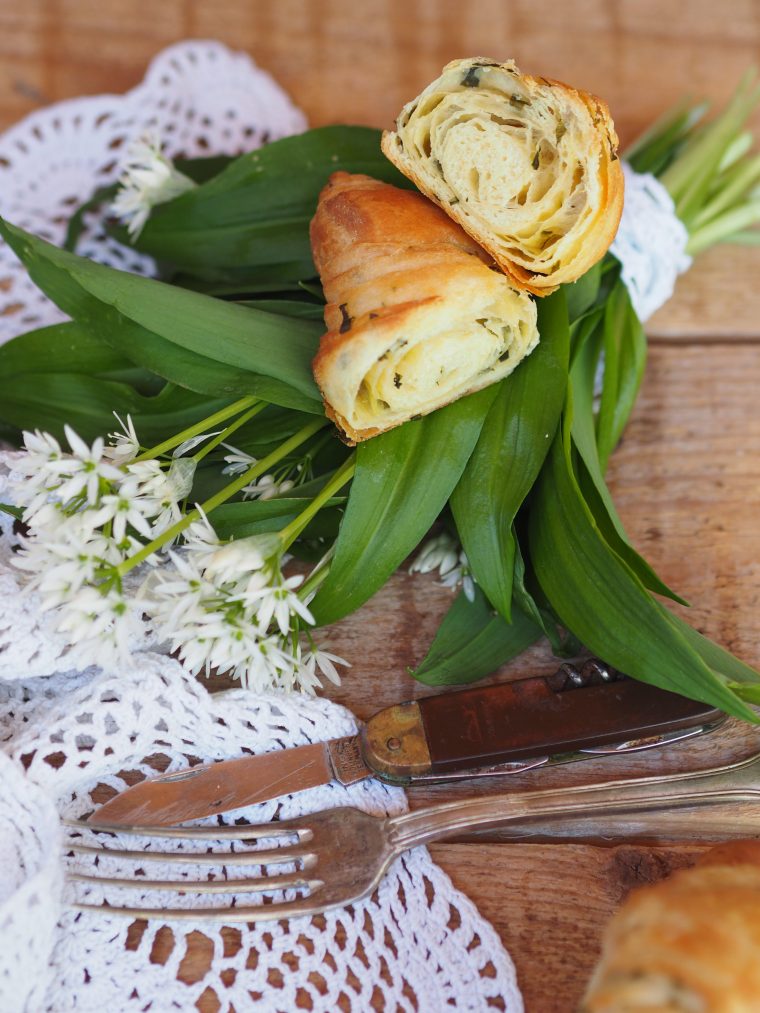