Cheesecake is a beloved dessert around the world. While many assume that it has its origins in New York, it actually dates back much further. The first “cheese cake” may have been created on the Greek island of Samos. Physical anthropologists excavated cheese molds there which were dated circa 2,000 B.C. , but cheese and cheese products had most likely been around for thousands of years before this.When the Romans conquered Greece, the cheesecake recipe was  modified by them to include crushed cheese and eggs. These ingredients were baked under a hot brick and it was served warm on special occasions. Marcus Cato, a Roman politician in the first century B.C., is credited as recording the oldest known Roman cheesecake recipe. As the Romans expanded their empire, they brought cheesecake recipes to the Europeans. Great Britain and Eastern Europe began experimenting with ways to put their own unique spin on cheesecake. 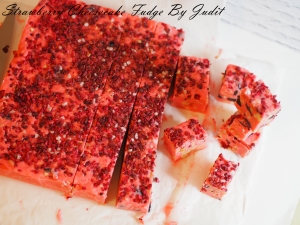 “Pink is a beautiful color, because it is one of the colors that the sun makes at twilight and in the dawns.” C. JoyBell C.

In each country of Europe, the recipes started taking on different cultural shapes, using ingredients native to each region. In 1545, the first printed cookbook described the cheesecake as a flour-based sweet food. Henry VIII’s chef, for example, cut cheese into very small pieces, soaked the pieces in milk for three hours, he then strained the mixture and added eggs, butter and sugar.Cream cheese was an American addition to the cake, and it has since become a staple ingredient. In 1872, a New York dairy farmer, William Lawrence of Chester, was attempting to replicate the French cheese Neufchatel. Instead, he accidentally discovered a process which resulted in the creation of cream cheese. Three years later, cream cheese was packaged in foil and distributed to local stores under the Philadelphia Cream Cheese brand. 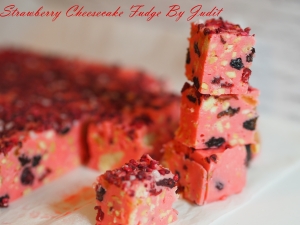 Method
Line a tall-sided baking tray, approximately 32×20 cm, with nonstick baking paper. Melt the white chocolate and the marshmallows in separate bowls, 20 seconds at a time until they puff up and melt. Melt the butter, caster sugar and the soured cream in a medium pan. Heat it gently, stirring now and then and let the butter and caster sugar melt.Turn up the heat and bring to the boil, stirring a bit more often to stop it from catching on the base of the pan. Bring the mixture to 113 C, in about 5 minutes, and take it off the heat. Add the melted white chocolate, strawberries, nuts, extract and food colouring to the pan mixture and stir in well.  Mix in melted marshmallows thoroughly, then finally add the biscuit. Pour it into the lined tin, level out the top and leave it to set for 4 hours at room temp or overnight. When set, cube it up. These will keep for up to one month stored air tight container.

“We got into an argument over the color of love. I said it was pink, and he said it was red. So you see, I had no other choice but to stab him. ” Jarod Kintz

2 thoughts on “With Love…in Advance: Valentine’s Strawberry Cheesecake Fudge – Yet Another Way to Use Leftover Bakes”