“Rocks in my path? I keep them all. With them I shall build my castle.” Nemo Nox

One can be a portion-perfect, blessed, talented and creative kitchen fairy, still, law is law: leftovers are a fact of life. They can be boring , annoying, dull and depressing, however, the magic of a real kitchen fairy lies in the knowledge of the secret: there is another way to look at leftovers…a way that can save time, effort, and money, and can  lift the kitchen fairy into the heights of a magic queen. Cook once, eat twice…The action is easy. Cooking once and eating more times also means purchasing larger amount of things when they’re on sale. Although the recipe below was created from an accidentally found box of unplanned leftover biscuit and cookie selection,  the reusing cycle of a household can be well organised. Once the recipe is written and tried, instead of having unplanned leftovers, why not have “planned-overs” on hand? In my kitchen “planned-overs” stand for the extra amounts of key ingredients such as biscuit and bread, that can be prepared in additional quantities to use in a future meal. With planned-overs, one can cook it once but eat it many times…. 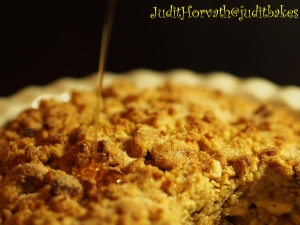 Preparation method
Preheat the oven to 180 degrees C. Place the flour and sugar in a large bowl and mix well. Taking a few cubes of butter at a time rub into the flour mixture. Keep rubbing until the mixture resembles breadcrumbs. Mix in the rest of the ingredients, including the biscuit/cookie crumbs. Place all the fruit in a large bowl and sprinkle over the flour, zest and cinnamon, then finally add maple syrup. Stir well. Butter an ovenproof dish (about 20-24 cm). Spoon the fruit mixture into the bottom, then sprinkle the crumble mixture on top. Bake in the oven for 40-45 minutes until the crumble is browned and the fruit mixture bubbling. Serve with thick cream or custard. 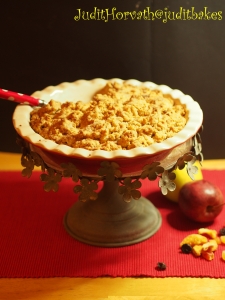 “When poets write about food it is usually celebratory. Food as the thing-in-itself, but also the thoughtful preparation of meals, the serving of meals, meals communally shared: a sense of the sacred in the profane.” Joyce Carol Oates