“Promises and pie-crust are made to be broken.” Jonathan Swift

A vol-au-vent , French for “windblown” to describe its lightness, is a hollow case of fluffy puff pastry typically made by cutting two circles,squares or rectangles in rolled out puff pastry, cutting a hole in one of them, then stacking the shaped pieces on top of the full, disc style piece. This pastry is usually filled with savory ingredients, but can also have a sweet filling. These little tartlets may be small in size, but are grand  on appearance, taste and make a case for their creators! 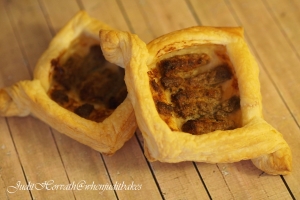 “I like a cook who smiles out loud when he tastes his own work. Let God worry about your modesty.” Robert Farrar Capon

Preparation
For the pastry, place the flour and salt in a large mixing bowl. Add the water and lemon juice. Mix to combine and then tip out onto a floured work surface. Briefly knead to form a rough, but evenly combined, dough. Place the pastry in the fridge to rest for 1-2 hours. On a lightly floured work surface, roll the pastry out into a rectangle approximately 50x30cm. Slice the butter and lay this over two-thirds of the dough. Fold the unbuttered dough third over the buttered one, then flip that over the remaining buttered third so that the butter is wrapped inside the dough. Take a rolling pin and lightly roll the upper surface of the dough to press out any air bubbles. Seal the edges with a sharp whack of the rolling pin. Give the pastry what is known as one single turn – fold the bottom third of the pastry up, then the top third down. Roll the pastry out towards the folded edges until it measures roughly 60x25cm, then fold the pastry in by thirds again. Give the pastry a further two turns, without resting in between. Place the pastry on a plate, cover with cling film and transfer to the fridge to chill for 30 minutes.

Preheat the oven to 200C and line a baking tray with baking paper. For the filling, in a bowl combine the dried herbs, salt and pepper, pork mince, HP sauce. Stir, then add 100 g breadcrumbs. Mix well. In a chopper whiz the wild mushrooms, egg, 100 g breadcrumbs, spices to combine well.
Remove the pastry from the fridge and roll it into a fairly shallow rectangle. Cut dough into equal sized squares, Fold each square into a pyramid. Using a pizza cutter or a sharp knife, cut about a one inch border along the shorter inside edges to almost the corner of each side. Open the pyramid back to a diamond shape. Egg wash the centre area of the dough. Fold each cut edge to the opposite side so a diamond shape is created. Press down on the edges so that they are sealed. Egg wash the edges. “Dock” the inside centre area of the dough by making fork pricks all over. This will keep the centre from puffing too much during baking it. Roll the meat into a long, thin sausage, approximately the same length as the pastry. (Don’t make it too thick or the sausage will not cook.) Place three stripes of the sausage on the pastry. Spoon the mushroom mixture into the gaps. Place the rolls on the lined baking tray and bake for 20-30 minutes, or until puffed and golden-brown. 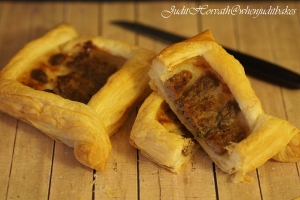 “Cookery is not chemistry. It is an art. It requires instinct and taste rather than exact measurements.” Marcel Boulestin