Nutella is something quite special. With an effort, one could actually call it healthy due to its nut and cocoa content, but it would just aim to soothe the guilty soul when its reacts to the call of the greedy stomach…

In the Piedmont district of Italy, Pietro Ferrero, a patisserie owner and founder of the Ferrero company invented the hazelnut spread. He originally began adding hazelnuts to chocolate during the second World War when cocoa was being rationed. Hazelnuts were plentiful in his local area, and the process helped Ferrero to stretch the amount of cocoa. He called the resulting sweet treat Pasta Gianduja. Pasta meant “paste” in Italian, and gianduja (appeared as a smiling cartoon in the first advertisements for the chocolate-hazelnut treat) was the name of an Italian carnival character famous to the locals.  The earliest version of Pasta Gianduja was sold as a foil-wrapped loaf that mothers would slice and serve on bread. Children were often reported to eat the gianduja on its own, so Ferrero altered the recipe and began selling it in a jar as a spread, renaming it Supercrema Gianduja. The spread was eventually renamed Nutella in 1964. 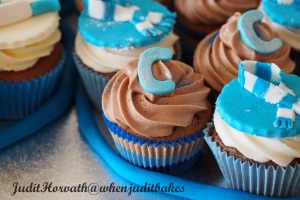 Preheat oven to 180 degrees C. In a bowl, whisk the dry ingredients to combine; set aside.  Beat the butter until it is soft, then add sugar. Add hazelnut spread and mix until smooth.  Add the eggs, one at a time beating until they are well combined. Combine vanilla and milk. Add dry ingredients alternately with the milk, beginning and ending with dry.  Beat just to combine. Finally fold in chopped nuts. Divide batter among the muffin tins, filling each no more and 2/3.  Bake 20-22 minutes, until a toothpick inserted in the centre comes out clean. Allow to cool completely before frosting. Makes about 16 cupcakes. 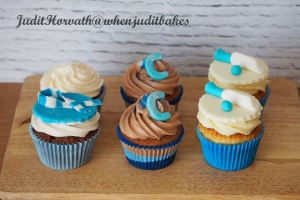 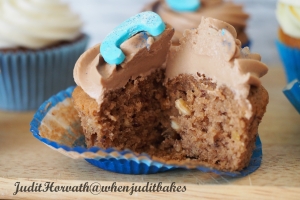 4 thoughts on “Birthday Guy’s Selection: Indulgent Nut and Nutella Cupcakes just Because He Loves It”