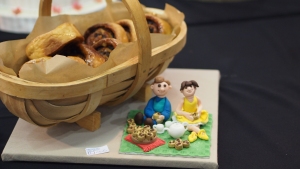 Chelsea buns are made by taking yeast-risen dough enriched with an egg; covering dough with melted butter; adding a filling of sugar, dried fruit, spice; and, finally, rolling and cutting the dough into rounds before being proving and baking. Biting in to these layered buns when they are still a bit warm after baking, one encounters a variety of tastes and textures: soft, light dough; sweet dried fruit; citrusy candied peel; and warm, sweet mixed spice. Marvellous.

Chelsea buns were created at The Chelsea Bun House, an establishment which was situated on the borders of Chelsea and Pimlico, London. The Chelsea Bun House was in business for the best part of a century; eventually closing it’s doors in 1839. At the height of its success in the 18th century it was frequented by high society, including Kings George II and III, who called in for a bun en route to the nearby Ranelagh Pleasure Gardens. The Bun House was also noted for its hot-cross buns. Legend has it that on Good Friday in 1829, 240,000 hot-cross buns were sold, and crowds of over 50,000 thronged outside the shop in anticipation of delicious buns hot from the kitchen’s ovens.

As convenient and tasty as shop-bought versions can be, homemade is always best. Being done with marmalade, the resulting Chelsea Buns are beautifully sticky and sweet. If there are only a handful of recipes that have to be tried before one dies, this is certainly one of them. 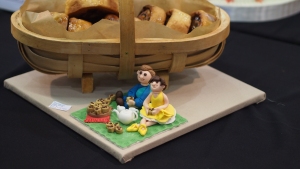 Preparation method
Sift the flour and salt into a large bowl. Make a well in the middle and add the yeast. Meanwhile, warm the milk and butter in a saucepan until the butter melts and the mixture is lukewarm. Add the milk mixture, marmalade and egg to the flour mixture and stir until the contents of the bowl come together as a soft dough, may need to add a little extra flour. Tip the dough onto a generously floured work surface. Knead for five minutes, adding more flour if necessary, until the dough is smooth and elastic and no longer feels sticky. Lightly oil a bowl with a little of the vegetable oil. Place the dough into the bowl and turn until it is covered in the oil. Cover the bowl with cling film and set aside in a warm place for one hour, or until the dough has doubled in size.

Lightly grease a baking tray. For the filling, knock the dough back to its original size and turn out onto a lightly floured work surface. Roll the dough out into a rectangle 0.5cm/¼in thick. Brush all over with the melted butter, marmalade, then sprinkle over the brown sugar, spice and dried fruit. Roll the dough up into a tight cylinder , cut ten 4cm/1½in slice and place them onto a lightly greased baking sheet, leaving a little space between each slice. Cover with a tea towel and set aside to rise for 30 minutes.

Preheat oven to 190C/Gas 5. Bake the buns in the oven for 20-25 minutes, or until risen and golden-brown. Meanwhile, for the glaze, heat the honey and marmalade in a saucepan until boiling. Reduce the heat and simmer for 2-3 minutes. Remove the buns from the oven and brush with the glaze, then set aside to cool on a wire rack. 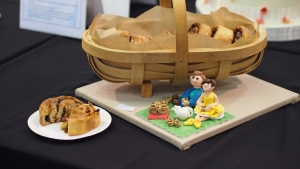 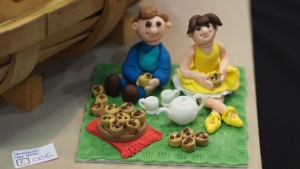 20 thoughts on “Charming Chelsea Buns made with marmalade”